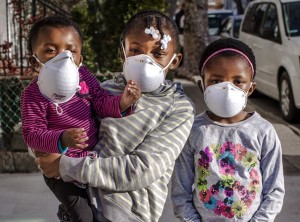 It had been a rough couple of years for Tanisha Garner. In 2010 she left an abusive marriage and moved out of Newark’s West Ward, the neighborhood where she was born and raised; around the same time, she lost her job as a Verizon technician. To make ends meet, she eventually turned to welfare, but that only helped so much: After two years, the rental assistance keeping her and her three children in an apartment in Newark’s Central Ward expired. Out of options, and out of money, she moved her family to the Ironbound.

Diesel exhaust exposure is a matchless predictor of poor health outcomes, says Robert Laumbach, MD, MPH, a professor at Rutgers’s Robert Wood Johnson Medical School. Nationwide, diesel exhaust has been linked to increased rates of asthma, lung cancer, and pre-term birth, and polycyclic aromatic hydrocarbons, some of its component chemicals, have been found to cause both ADD and ADHD in children in the New York metro area. “It contains tiny particles that get deep into the lungs, which carry on them other pollutants like a delivery system,” Laumbach explains.

Click the link below to read the whole article.